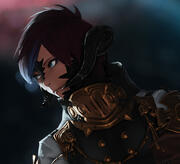 Personality
Zaya is friendly, enjoys good food and drink with good company, and is happy to chat with most people, however she is reserved, and will avoid opening up unless it is with someone she trusts.
Though she's become accustomed to Eorzean culture, getting on her nerves enough will dig up the fiery temper many Xaela are known for.

For her friends she is a fiercely loyal friend, and will offer her help wherever she can, in some cases putting their needs over her own.

Other stuff
As for a physical descripion, Zaya is short compared to most races, as is typical for Xaela women, but she is not weak, she is a Dazkar and was a fighter from birth, she will happily take on someone twice her size if provoked.Being from the steppe, Zaya loves to spar, wrestle or fight with her friends, to her it can be a form of affection and an opportunity to bond, though having adjusted to Eorzean traditions, she understands it is not commonly accepted.While Zaya is not stupid, Xaela practice a mostly oral tradition, so her ability to read is not the best. Even when she became a Red Mage her use of magic is more intuitive than anything else, and favours the melee combat side of it.

Hi! I'm still working on this so if you're seeing this feel free to approach ooc or just say hi in character!